Changes in mining regulations advance, but leave much to be desired

After lengthy discussions, at the end of November the Federal Senate approved two presidential decrees that alter the legislative environment of the mining sector. MP 789, which modifies the rules of Financial Compensation for the Exploration of Mineral Resources, CFEM, and MP 791, which creates the National Mining Agency to replace the National Department of Mineral Production. The final texts of Conversion Bills Nos. 38/17 and 37/17, submitted for presidential approval, were finally converted, respectively, into Laws No. 13,540/2017 and 13,575/2017, published in the Official Federal Gazette on December 19 and 27.

The proposal approved by the Senate and converted into Law No. 13,540/2017, which deals with CFEM, generated since the publication of its original text in July 2017 (in the form of MP 789), severe reactions on the part of companies and experts in the sector, who claim that the new structure for collection of CFEM greatly increases the costs of a sector already heavily burdened by taxes.

Among the changes approved, we highlight: 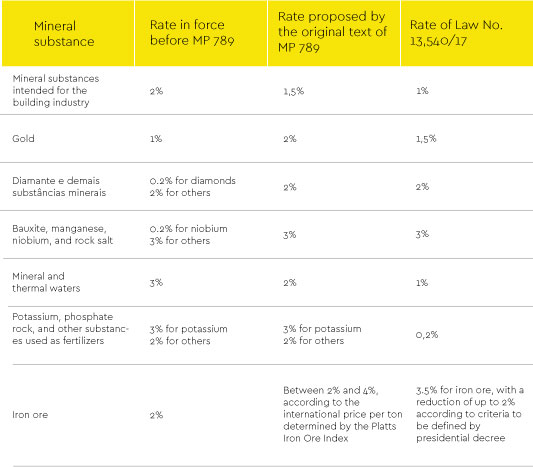 President Temer, upon approving Law No. 13,540/2017, exercised his prerogative of veto for two material provisions. The first veto resulted in the exclusion of "municipalities socially impacted by mining activity" among those that would be entitled to a share of the CFEM, on the grounds that the criterion "socially impacted" is too subjective.

The second veto excluded the point two percent (0.2%) rate proposed for the extraction of gold and diamonds under the framework mines, previous stones, and colored cuttable stones, in addition to limestone as a soil corrective, potassium, rock salt, phosphate rocks, and other fertilizers, these materials being subject to the rate described above. The reason for the veto, according to the President’s office, was that reduction in the tax rate would result in a significant loss of resources for part of the municipalities that are entitled to a share in the CFEM, in addition to impacting on the transfer to the Federal Government, constituting a renunciation of revenue without an indication of compensatory revenue.

The new law also brought in changes that have resolved various legal clashes over the last few years in a manner favorable to the government and to the detriment of companies. An example is the obligatory collection of CFEM when purchasing mineral assets at public auction. The new law also innovated when defined mining waste and tailings resulting from the exploration mining rights as mineral goods for CFEM collecting purposes. The CFEM rate applied to these mineral assets will be halved if the tailing is used in other production chains.

It is also worth mentioning the adoption of a mechanism to define the base price for minerals by the sector's regulatory agency in order to guarantee a higher value-added calculation basis for collection of CFEM at the time of transactions transferring between establishments of the same company, or from the same economic group. This same mechanism also provide that the CFEM will apply at the time of consumption or effective sale of the mineral asset, another topic that may lead to new debates, given the difficulty of delimiting the new concept of consumption brought about by the legislative change, as well as the various stages related to the industrial transformation of mineral goods.

MP 791, converted into Law No. 13,575/2017, in turn, sets forth the creation of the National Mining Agency, a federal agency that replaces the former National Department of Mineral Production, DNPM. Although the agency is still below the Ministry of Mines and Energy, the measure was positive since it aims to amend a previous legislative distortion that allowed the creation of an agency for each of the main economic sectors (telecommunications, with ANATEL, oil and gas, with the ANP, electric power, with ANEEL, among others), but left out the mining sector.

Although it was well regarded by participants in the industry, the mere creation of a new agency, with the absorption of staff and budget of the predecessor agency, does little to alter the regulatory and oversight panorama of the mining sector, which lacks investments to supply retained work demand, especially in the light of new environmental and rules and regulations for mining dams in response to the Mariana accident. It is a consensus that if the agency's regulations are not accompanied by an increase in its budget allocation for new contracts and modernization of its equipment and systems, the measure may have little impact.

Lastly, MP 790, issued by the president together with the two others presented here and, in fact, the only one of the presidential decrees that dealt with material changes in the current Mining Code, did not succeed in the National Congress. The text was not voted in due time by the National Congress and lost its effectiveness, which represented a defeat for participants in the mining sector who defended its approval as essential for legal security brought about by the set of presidential decrees and for the necessary modernization of the current regulatory framework.

The uncertainty in the sector is therefore maintained as to possible new legislative changes in the future and the understanding of a considerable part of the investors and agents in the mining sector is confirmed to the effect that the government’s measures were predominantly for revenue purposes, without any relevant upside for the industry.