Issuances of debentures had been showing strong growth since 2018, a process that was interrupted, albeit briefly, by the covid-19 pandemic. Just as an example, in 2019, as per a report byValor Econômico, the volume of issuances reached a record level of R$ 33.7 billion, totaling almost 100 issuances, with an average value of R$ 300 million per paper.

Incentivized debentures, used to finance infrastructure projects, with a focus on the energy and transportation sectors in particular, have shown historic growth. Since its creation in 2012, the total volume of issuances in 2019 exceeded BNDES' disbursements, totaling R$ 24.4 billion and taking the lead as the main instrument for financing infrastructure, according to data from Anbima and BNDES, highlighted in the figure below: 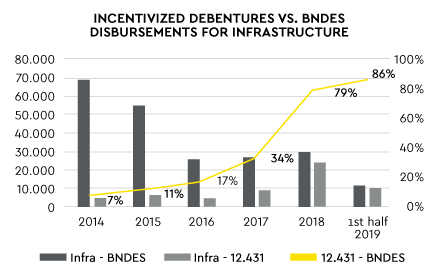 In 2020, the pandemic led to a reduction in the numbers to levels below those of 2018, but still much higher than in 2017. If, on the one hand, the total number exceeds that recorded in 2017, the number of issuances was lower, 35 this year against 49 papers issued in 2017, according to Anbima data.

The positive news is that the average value of 2020 issuances exceeds even the 2019 average, R$ 480 million, and the terms continue to extend, which means that the market believes in the security and liquidity of these papers.

Two factors indicate a considerable high expectation for 2021. First, a series of auctions has been postponed to next year and, as these projects are resumed, they should increase demand for infrastructure debentures. Then, a series of regulatory innovations took place in the telecommunications and sanitation sectors, which today account for less than 5% of the total volume of issuances, if added together.

The telecommunications sector recently saw the publication of Ordinance No. 502/2020, which modernized the regulation of processes for classifying incentivized debenture issuances by companies in the sector. The main innovations were expansion of eligible projects, issues related to project expenses, such as the possibility of reimbursement of expenses, future investments and reimbursement for grant expenses, and, especially, the possibility of financing imported goods. There are also high expectations with the arrival of 5G technology, which will require large investments. This new legal framework and the news in the sector should make incentivized debentures more attractive to finance projects in the sector.

The sanitation sector, in turn, has just received the new Regulatory Framework, which facilitates the concession of services to the private initiative. Dozens of bids are already planned for 2021. By 2030, the Ministry of Regional Development expects that between R$500 billion and R$700 billion will be invested in the sector, which today has the highest demand and expectation for investment in the infrastructure segment. At the same time, private companies account for about 3% of water and sewage service providers. As private players become more involved in the sector, demand for financing will automatically grow. Naturally, the incentivized debentures will now play an important role in financing sanitation projects.

Despite the pandemic, 2020 was a year of important legal milestones for the infrastructure sector. In May, the Chamber of Deputies proposed PL 2646, authored by Deputy Arnaldo Jardim, which, among other innovations, proposes the creation of a new class of infrastructure debentures, papers whose tax benefits would apply directly to the legal entity sponsoring the project. This would create higher yielding papers, more attractive to the market, especially for institutional investors such as large funds. In addition, the possibility of foreign exchange variation in the new infrastructure debentures could attract foreign investors.

Currently, bill 2646 has been sent to the Labor, Administration and Public Service; Finance and Taxation; and Constitution and Justice and Citizenship committees, and is subject to conclusive consideration, that is, it does not need to go to the floor of the Chamber of Deputies, and must only be approved in the committees.

The federal government has updated Decree No. 8,874/16, which regulates Law No. 12,431/11, through the promulgation of Decree No. 10,378/20. Thus, the scope of the law was extended to the financing of infrastructure projects that present environmental and social benefits, through the possibility of classifying the issuance of incentivized debentures. The sectors of urban mobility, clean energy, and basic sanitation are covered. Apart from the issue of the nature of the projects, Decree No. 10,378/20 also allows the inclusion of smaller projects or projects that are not necessarily developed by concessionaires, permissionaires, or holders of public service authorization.

We see a significant increase in funding for sustainable projects through green bonds. Since January of 2020, according to data from the database of Sitawi, R$ 3.96 billion in green, transitional, or sustainable debentures were issued. All these papers were given a second opinion by specialized consultants.

According to the Sitawi database, the energy sector was responsible for R$ 1.6 billion, with special attention to Eneva's incentivized debentures, in two series, totaling R$ 950 million, with terms of 10 and 15 years. The transition debenture is a label aimed at carbon emitters who cannot receive a green label, but who seek to finance their gradual transition to a sustainable operation. It is also worth mentioning the incentivized green issuance by Neoenergia, which had a 25-year term and, like Eneva's issuance, had a second opinion from Sitawi.

Also according to information from Sitawi, the sanitation sector is surprising with R$ 1.98 billion in green issuances, driven mainly by the BRK Ambiental transaction, which represents the first issuance of infrastructure debentures to finance a winning project in Alagoas, the first bidding after the new Legal Framework for Sanitation.

Among the main benefits in issuing green bonds to sponsors are:

For investors, the benefits are greater transparency in the use of resources and frequent classification into in long-term strategies. In addition, the specific allocation of funds and their monitoring can reduce the risks of green projects associated with the investment, according to Febraban's Guide for Issuance of Green Securities in Brazil.

Although the year 2020 presented great adversities for the market as a whole, the infrastructure sector is taking a breath of fresh air with incentivized debenture issuances, which are certainly consolidating their position as the sector's main financing instrument. These papers have grown well in a year in which discussions regarding ESG issues have been central to the debates. Infrastructure debentures will return with everything in the year 2021, with important advances in 2020. The scenario for debentures is extremely positive.