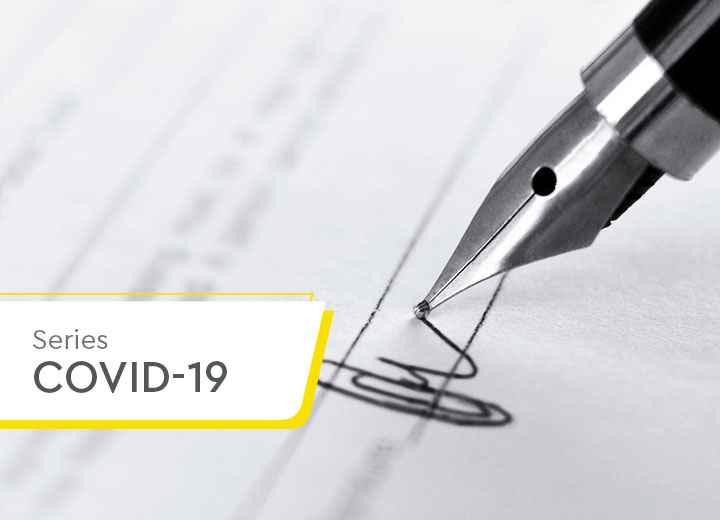 The federal government published, in an extra edition of the Official Gazette on April 1, Executive Order No. 936/20 (MP 936), which institutes the Emergency Program for the Maintenance of Employment and Income. The objective is to protect workers and ensure their employability during the period of public calamity mandated by Law No. 13,979/20. Among the measures proposed by the government is suspension of employment contracts for a maximum period of 60 days.

On March 22, the government had already issued Executive Order No. 927 (MP 927), with the intention of suspending employment contracts for up to four months while the calamity lasts. However, this measure, proposed in article 18 of the text, was repealed the following day by Executive Order No. 928 (MP 928). The main reason for revocation was the lack of regulations to reduce the financial impacts of suspension of contracts for workers. MP 936 has brought in provision to fill this need, at least partially.

According to article 8 of MP 936, during the state of public emergency, employers may agree to temporary suspension of the employment contracts of their employees for a maximum period of 60 days, divisible into up to two periods of 30 days.

In the head paragraph of the article it is possible to find two important changes in relation to article 18 of MP 927. The first is the maximum period of suspension of contract, which used to be four months and is now limited to 60 days, with the possibility of two successive periods of 30 days each. The second change is the need expressed according to the employee. The wording of MP 927 generated discussion about this need, since subsection II of article 18 provided that this suspension "could be agreed upon individually with employees," which denotes absence of a mandatory term.

The formalization of the agreement must be sent to the labor union and to the Ministry of Economy within ten days after its execution. This time limit is necessary to enable inclusion of the worker in the Emergency Program for Maintenance of Employment and Income.

With the formalization of the suspension of contracts under the terms above, the federal government will pay 100% of the unemployment insurance that would be due to employees, considering their nominal salary. This amount may reach a maximum of R$ 1,813.03, if the employee receives an average salary above R$ 2,666.29.

For salaries below this ceiling, the calculation is based on various assumptions:

The exception to this rule are companies that have annual gross revenue above R$ 4.8 million. In this case, the government pays 70% of the above amounts and the employer is obliged to maintain the payment of 30% of the employee's salary.

During the suspension of contracts, employers must maintain all benefits granted to employees, our mere liberality or by determination of a collective bargaining agreement.

During this period, employers will not need to maintain FGTS payments due to employees or the payment of INSS contributions. MP 936, however, allows employees to make the payment of social contributions as optional insureds, for the period to be accounted for retirement purposes, and other social benefits governed by the INSS.

MP 936 requires the agreement to be in writing, since employers may negotiate the maintenance of a daily allowance for employees during the period. The negotiated daily allowance and the mandatory allowance for employees of companies with annual gross revenue above R$ 4.8 million will be compensatory and will not form part of the basis for calculating withholding income tax and the annual income tax adjustment declaration of employees.

The allowance will also not be reflected in social security contributions or in other taxes and fees levied on payroll, nor will it be the calculation basis for the payment of the employee's FGTS.

The payment may also be deducted from the company's net income for the purposes of determining corporate income tax and Social Contribution on Net Income of legal entities taxed under the actual profit arrangement.

The suspension will cease in three cases: with a formal request to return to work made by the employer, at the end of the agreed-upon period, or when the end of the period of calamity is decreed. Employees will return to work within two consecutive days, counted from the occurrence of any of these scenarios.

MP 936 also provides for penalties if the employee performs any type of work activity for the employer during the period, even if partially, remotely, or via teleworking. In cases of proven activity, employers will be compelled to pay wages and social contributions in full during the period, in addition to the legal sanctions provided for in collective bargaining agreements.

The suspension of contracts pursuant to article 8 of MP 936 shall apply to internship contracts and part-time contracts. It is not equated to the provisions of article 476-A. To include employees in this program, employers do not need to provide employees with a vocational training course.

In any case of suspension of contract using the benefits of the Emergency Program for Maintenance of Employment and Income, the employees affected will have their jobs guaranteed during the suspension and for an equivalent period subsequent thereto.