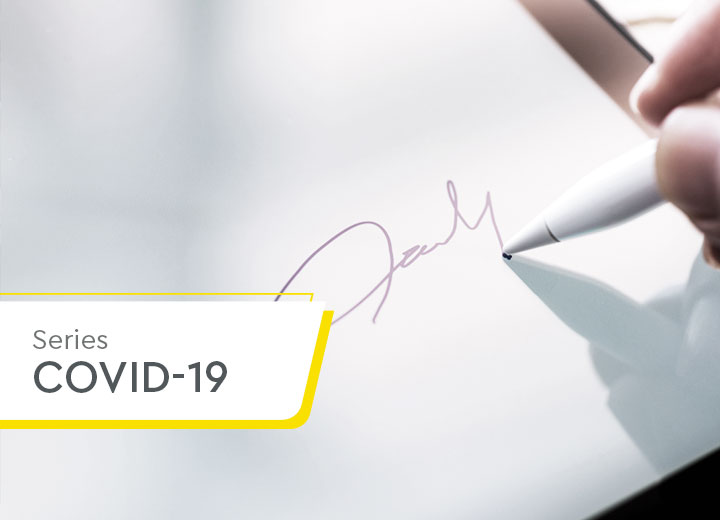 The world has been facing various challenges in the fight against the new coronavirus (the cause of  covid-19), which has resulted in different preventive measures in an attempt to mitigate the proliferation of the virus. One of the main ones is the removal of employees from the workplace and the implementation of work from home policies (remote work). In this scenario, companies need to adapt quickly to the physical absence of people and find remote solutions for the continuity of business. Considering the importance, necessity (and even the fast pace of certain projects) and the impossibility of holding face-to-face meetings, many companies have sought to confirm the legal validity of electronically signed documents.

In Brazil, Provisional Measure No. 2,200-2, of August 24, 2001 (MP 2200)[1] guarantees the validity and effectiveness of documents signed electronically through certification processes provided for by the Brazilian Public Keys Infrastructure (ICP-Brasil). Article 10, paragraph 2, of MP 2200 also allows the use of other means of proving the authorship and integrity of electronic documents, including those using certificates not issued in accordance with ICP-Brasil, provided that this is agreed upon between the parties and that these certificates are expressly accepted by them as valid.[2]

Brazilian case law has recognized the legal validity and the possibility of registration of electronic documents produced pursuant to MP 2200.[3] Going further, the Superior Court of Justice (STJ) has already recognized the enforceability of a contract signed electronically by means of a digital certificate without the signature of witnesses. The Court found that the authenticity of the parties' signatures conferred by the certification body, as a disinterested and trustworthy third party, would make up for this absence.[4] However, although there is precedent issued by a higher court, some judges insist on denying the enforceability of electronic documents without the signature of witnesses because of the absence of an essential element[5] (as required under article 784, subsection III, of the Code of Civil Procedure).[6]

Therefore, a more conservative approach recommends that, even in contracts signed electronically, two witnesses should sign the contract (also in electronic form) in order to avoid challenges regarding the enforceability of the contract. Witnesses must be civilly competent and have no financial interest in the agreement between the parties.

Thus, it is concluded that contracts signed electronically in accordance with MP 2200 are endowed with legal validity and qualify as extrajudicially enforceable instruments, in the same way as contracts physically signed by the parties, provided that they do not refer to legal transactions for which the law explicitly requires a public instrument/deed. This is the case, for example, of contracts that seek to transfer in rem rights in real estate.

In the event that the parties choose to use mechanisms not certified by ICP-Brasil, however, it is recommended that the document expressly state the form of signature adopted and that the parties recognize it as fully valid and effective.

Electronically signed documents are widely accepted in the judiciary as documentary evidence, either because they have legal validity under the law (as described above) or because judicial proceedings themselves are on their way to being fully digital. This is what is stated in article 441 of the Code of Civil Procedure[7], which admits the use of electronic documents as evidence, and Law No. 11,419/06, which provides for the digitalization of judicial proceedings.

It is important to emphasize that the considerations of this article are valid only from a Brazilian law perspective and, therefore, if the document involves the jurisdiction of other countries (as in international M&A transactions), the legal validity of the electronic signature should be confirmed and certified by professionals qualified in the applicable jurisdictions.

[1] MP 2200 had its effectiveness deferred by Constitutional Amendment No. 32/2001 and remains in force and fully applicable until (i) it is expressly revoked or (ii) there is a definitive resolution by the Brazilian Congress on the matter.

STF, Motion for In Limine Injunctive Relief in ADI No. 5.108/DF, opinion drafted by Justice Dias Toffoli, decided on April 20, 2016.

[6] Article 784. Extrajudicially enforceable instruments are: (...) III - the private document signed by the debtor and by two (2) witnesses.

[7] Article 441. Electronic documents produced and kept in compliance with the specific laws and regulations shall be accepted.