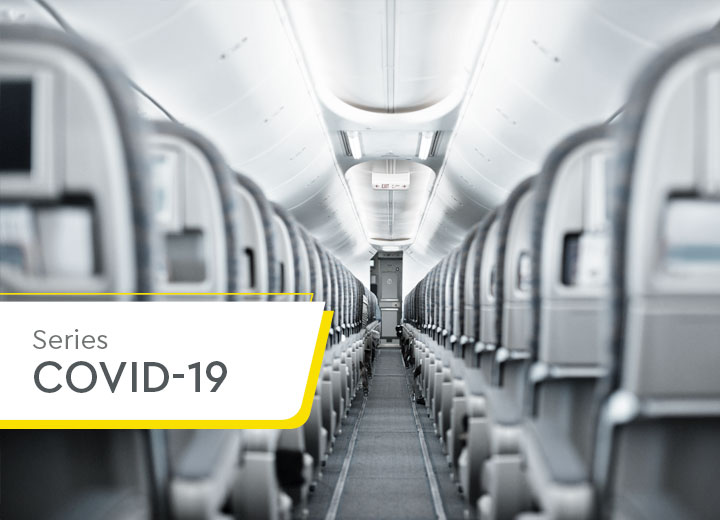 The air sector was one of the hardest hit by the effects of the covid-19 pandemic. Domestic and international travel have become practically unviable due to the closure of borders and social distancing. Per data from the International Air Transport Association (Iata), worldwide demand for flights decreased 54% and 7.5 million flights were cancelled, leading to a reduction of more than US$ 419 billion in revenues and a loss of market value for all companies in the sector.

Airlines have high operating costs involving expenditures on fees paid to the government and airports, salaries, and maintenance of aircraft. In addition, the change in the price of the dollar during the pandemic increased expenditures on fuel and lease payments. The significant decrease in revenue and the rise in the dollar have severely affected the payment capacity of many companies, especially those in emerging countries, where currency variation is a major problem. To avoid even more serious consequences, some countries have developed financial rescue plans.

The United States government reached an agreement in April of this year to allocate $25 billion to bail out major U.S. airlines, including American Airlines, Delta, United, and Southwest. The intention is for 70% of the loan to be for the payment of employees, without the need to return the money. The other 30% would be reimbursed in 10 years. On the other hand, companies will not be able to dismiss employees until September of 2020 or impose wage cuts. In addition, the U.S. Treasury will invest approximately US$ 100 million in the acquisition of shares in the companies. Companies participating in the agreement must refrain from repurchasing shares or paying dividends until September of 2021 and must agree to executive compensation limits until the end of March of 2022.

Another example of a country that has established measures to mitigate the consequences of the current crisis in the air sector is Germany. Lufthansa, the largest national airline and one of the largest in the world, has lost market value, suffering a reduction of approximately 50% in the price of its shares traded on the stock exchange. The airline and the German government closed a 9 billion euro support agreement. The package takes into consideration the needs of the company and the taxpayers and employees of the Lufthansa Group. In addition to the loan, the German government is expected to become the company's largest shareholder by acquiring 20% of its shares in a transaction involving some 300 million euros. Even so, the company will maintain its private management, with minimal government participation in corporate management and limited voting rights.

The Italian government has decided that in order to maintain Alitalia it will need to adopt more drastic measures. The Italian airline was already facing great financial difficulties before the pandemic and in 2017 it was placed under state supervision. The government has announced that it intends to nationalize the company and invest large amounts to keep it operating without having to fire its employees.

Some countries in the Middle East are also already taking steps to help the region's major airlines. According to Iata, the loss for these companies should increase to US$ 4.8 billion in 2020. The Dubai government has already committed itself to supporting Emirates and injecting capital into the company, although it has not yet announced any specific amount.

Also in the Middle East, the Egyptian airline El Al Israel, which has extended its suspension of operations until June 30, has not yet received financial support and is still without capital to pay its debts and resume operations. El Al has sought government guaranteed loans worth $400 million to survive during the crisis. Of this amount, US$ 150 million would come from the purchase of shares in the company by the state and the remainder from a loan.

In Brazil, the air market situation is no different. According to the National Civil Aviation Agency (Anac), in May 2020 there was a 91% reduction in demand for domestic flights and 97.6% for international flights compared to May of 2019. Due to the impact of the pandemic on the sector, Brazilian airlines will also receive government support. The National Economic Development Bank (BNDES) will offer a line of financing through private financial institutions. The official figure has not yet been released, but it is expected to be between R$ 4 and 7 billion. According to the Ministry of Infrastructure, 60% of this amount will come from the BNDES, 30% from bond issuances in the market and 10% from private banks. Brazil's major airlines - Latam, Azul, and Gol - are still negotiating the terms of this package with the government.

The difference in amounts between the aid packages made available by the Brazilian government and those of other countries is significant. Brazilian airlines have suffered losses in the billions equal to or even greater than most international companies and depend on the contribution of these funds to get through the crisis and continue with their operation without resorting to local bankruptcy or reorganization mechanisms. Despite the scenario, the Minister of Infrastructure, Tarcísio Gomes de Freitas, says that the situation of Brazilian airlines is under control and that they are confident that the BNDES line of credit will be granted.

Considering the strategic importance of air transport service, timely government assistance, such as that adopted in other countries, is increasingly needed. The future of Brazilian airlines remains permeated with uncertainty.