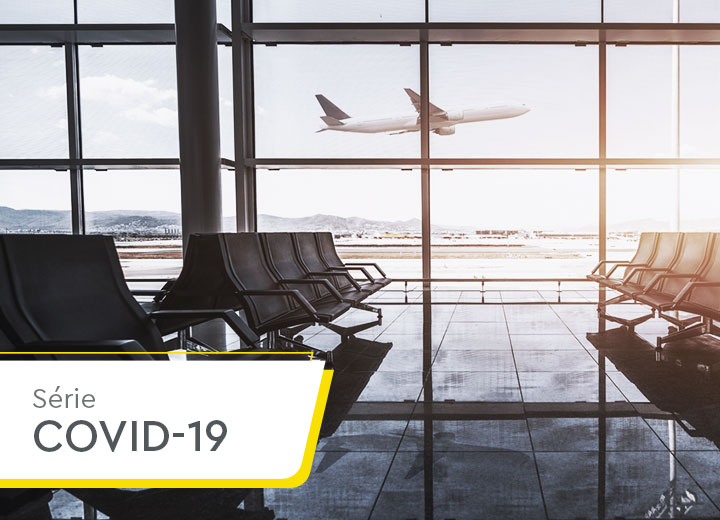 Effects of covid-19 on the aeronautical market: measures taken are relevant but insufficient

Since December of 2019, there has been talk about the spread of the coronavirus. The countries most affected initially were the first to feel the blow to the airline sector due to the cancellation of flights and the closure of airspace and borders. The situation quickly spread and, in a cascading effect, led to a scenario of calamity for this market on a global scale. Without a doubt, airlines are experiencing the worst crisis in their history, more serious, far-reaching, and long-lasting than that caused by 9/11 and the 2008 financial recession.

In the Brazilian scenario, it could not be otherwise. The increase in the value of the U.S. dollar, which in itself already raises the fixed operating costs of the industry, were combined with a rapid exponential drop in the demand for flights of all airlines and in movement of passengers in airport terminals. The result: airlines were forced to cancel numerous flights, relocate passengers, and leave their aircraft grounded.

In order to reduce the pernicious consequences of the covid-19 pandemic for the airline market, which may even culminate in the insolvency of companies in the industry, more than ever it will be necessary to rely on governments and other stakeholders to support the survival and rebuilding of the industry.

On March 18, the federal government published Executive Order No. 925/20, which provides for emergency measures for Brazilian civil aviation due to the covid-19 pandemic. Among them, the following are noteworthy: (i) extension of the deadline for payment of fixed and variable contributions in airport concession contracts until December 18, 2020; and (ii) establishment of a 12-month deadline for reimbursement of amounts paid to purchase airline tickets - consumers are exempt from contractual penalties if they accept the credit for use of the ticket within 12 months.

The measures are relevant to relieve airlines' cash flow in the short term, as they extend the deadline for payment of airport charges and compensation for cancelled flights, but they do not seem to be sufficient in view of the seriousness of the situation and the vagueness surrounding the industry’s return to regular operation.

Considering that the airline industry is complex, involves various players, namely financing companies, lessors, manufacturers, airlines, consumers, airport operators, and suffers the consequences of the volatility of oil prices and the value of the U.S. dollar, other initiatives likely need to be adopted in order for the industry to survive this period of crisis.

As it is one of the highest cost and lowest margin industries in the world, it may be anticipated that there will be an impact on aircraft leasing and financing arrangements and it will be necessary to renegotiate terms and conditions for such operations. In addition, the federal government will most probably have to intervene and provide assistance to airlines, both in financing and facilitating credit as well as in granting tax benefits and even possible reduction in applicable airport charges.

In the coming months, it is likely that the act of God and force majeure provisions of aircraft financing and leasing contracts will be triggered and the terms of such documents will have to be renegotiated.

This is an unprecedented global situation, which will require a joint effort of shareholders, airlines, financiers, consumers, and airport operators, in order to ensure continuity in the provision of a public service so relevant to the reduction of distances in today's society and to the development of various activities, such as tourism, medicine, cargo, and transportation of people, among others.

The announcement by BNDES of emergency credit lines for the industry on March 22 is therefore to be welcomed. This type of action, concrete and agile, may tip the scales between survival and disappearance of companies in Brazil.

Similar measures are being taken in other parts of the world, based on a shared view that the crisis is serious, but global economic activities will eventually return to normality and air transport will once again be essential, as always. Times of heavy turbulence must be crossed by looking at clear skies in the not-too-distant future.