As part of the #InvistaNoRio campaign, an initiative of the Municipal Bureau for Economic Development, Innovation and Simplification (SMDEIS) to boost business in the city of Rio de Janeiro, Municipal Decree No. 48,719/21 was published on April 6, which provides for the Integrated Building Licensing (Licin) procedure and aims to cut the red tape for applications for urban permits for new construction in the city.

The procedure previously took up to one year, but since April it has been possible to obtain project approval within 30 business days (excluding the deadline for issuing the license by the bureau after approval). The initiative promises to attract more investments for the city in the construction sector and the real estate market, since the delay in licensing was one of the main obstacles for companies in the business operating in the city.

The objective was to unify and simplify the stages of the licensing process in the city. Most of the information needed for the project, for example, was self-declared by the professionals responsible for architectural design (PRPA) and the execution of the works (PREO). According to the standard published, full compliance with the parameters and requirements of the Rio de Janeiro Master Plan, the Land Parceling, Use and Occupation Legislation, the Municipal Simplified Works, and Buildings Code and other urban planning legislation and technical standards in force at the municipal, state, and federal levels was also under the responsibility of the same professionals, together with the interested parties.

From now on, the procedures for approving architectural plans should observe the following steps:

As the diagram below shows, the steps described in the items 2, 3, 5 and 6 are the responsibility of qualified SMDEIS technical personnel and shall be carried out within the deadlines illustrated below. The fulfillment of requests and requirements must be done by interested parties within 30 business days, under penalty of cancelation. 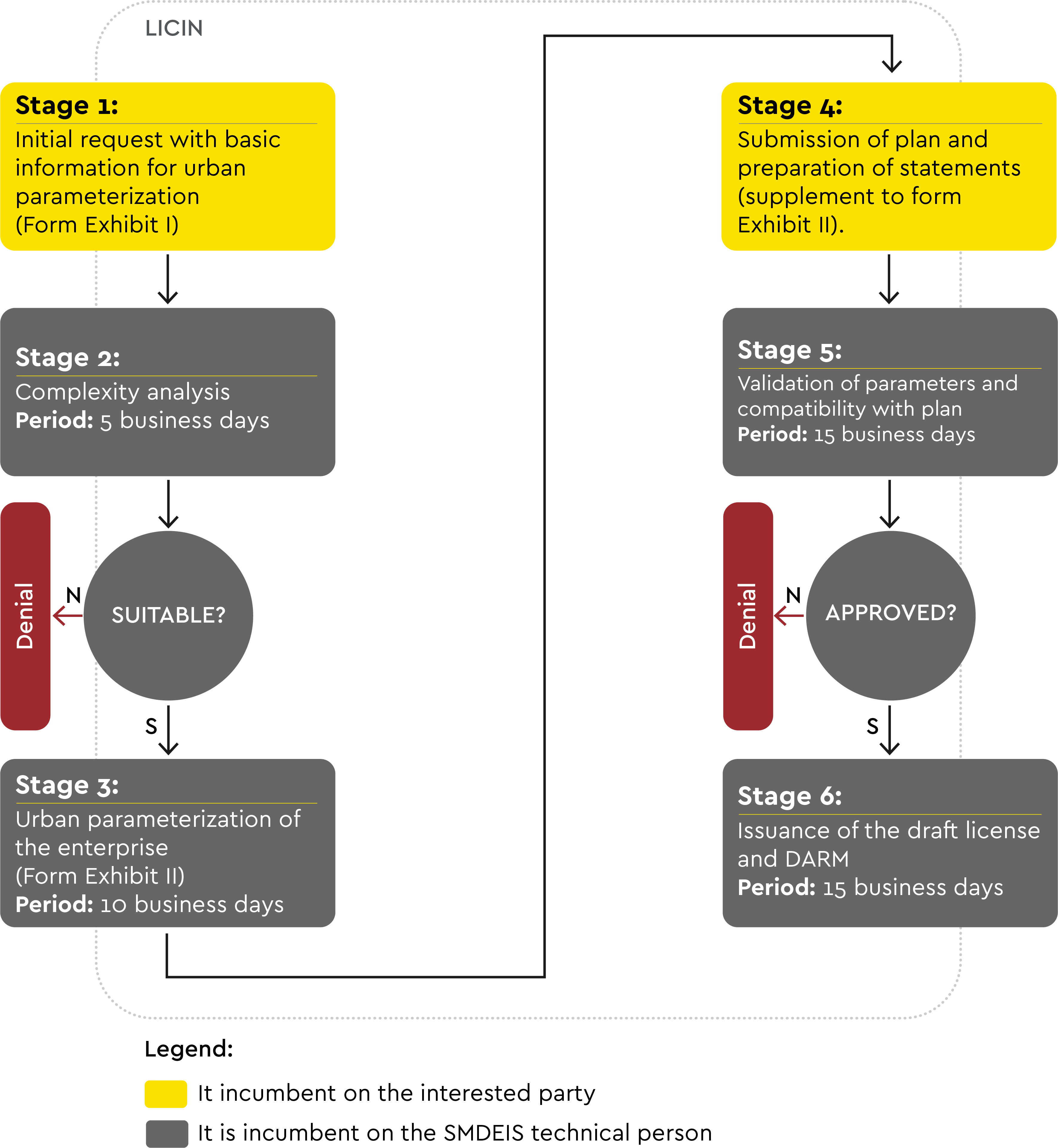 All plans that were already in progress may migrate to the Licin procedure, provided that the steps described above are covered. This migration must be done at the request of the applicant in writing.

As an exception, plans for buildings of great complexity are not subject to the above deadlines, as well as those involving buildings or groups with more than 500 units, buildings protected by heritage protection, which depend on the payment of consideration or grants tied with obligations, among other criteria[1] defined in SMDEIS Resolution No. 10, of February 1, 2021.

In such cases, the plan should be submitted at the opening of the process due to the need for a specific analysis. However, after the necessary authorizations and/or consents from the responsible agencies have been obtained, the plans of buildings of great complexity will be able to follow the same steps provided for other constructions. Documents proving authorizations must be submitted together with the data and information provided in the first stage of the Licin process.

Article 5 of Municipal Decree No. 48,719/21 also provides that the construction license via Licin will be issued upon presentation of the protocol number formalized in the agencies whose response is required for licensing. Its validity will be conditional on the assent of such agencies. Once all the requirements are met, the license must be issued, setting the maximum period of three months for the presentation of the agreement of all agencies, which may be extended until the works begin, according to the declaration regarding the phase of the work. The works may not begin until the cancellations are obtained by the applicant.

Once the building permit is obtained, the interested party will be responsible for reporting in the administrative process of the Licin procedure the dates of commencement of the works, completion of foundations, the first slab, and, finally, the works, when inspection will be carried out for the purposes of issuing a certificate of acceptance of works (commonly called Habite-se).

Given that the new decree came into force on the date of its publication on April 6, construction companies and the real estate market should already comply with the new rules for future ventures and may migrate the ongoing licensing processes to the Licin procedure.

Although the speed of the processes depends on the actions of the other bodies not subordinate to the City of Rio de Janeiro, the expectation is that the approvals for architectural plans with application of the Licin procedure will facilitate the performance of the real estate business in the city of Rio de Janeiro.

[1] Plans of great complexity are considered to be: (a) groups of buildings with more than 500 units, including integrated groups; (b) lots included in more than one urban zoning and/or subject to bands of influence with parameters different from those applied in the remainder of the lot; (c) lots that are in locations devoid of urban infrastructure and requiring execution of an urbanization consent; (d) land parceling projects; (e) projects involving assets that are subject to heritage protection or preserved projects in any sphere; (f) projects involving processing of investiture; (g) sites where the application of projected alignments (PAA) generates inconsistency in analysis; (h) projects that require specific environmental analysis, such as: (h.1) located on the beachfront; (h.2) found within or bordering environmental conservation units, except APA; (h.3) imply removal of plant cover subject to authorization and/or management of wild fauna; (h.4) depending on prior use, point to possible contamination of the land; and (h.5) intervention in areas of permanent preservation, as defined by Federal Law No. 12,651, of May 25, 2012; and (i) projects that depend on payment of consideration or a grant imposing an obligation for licensing.

When the Strategic Master Plan of São Paulo (PDE) was implemented through Law...
Real estate

The Superior Court of Justice (STJ), in a recent decision and unanimously, recognized...
Real estate

In a recent ruling on an appeal against a decision that denied attachment of real...
Real estate

The rise of the igp-m and the lease relations

The rise of the dollar and the growing demand for commodities led to a significant...
Real estate

Unconstitutionality of the collection of associative fee in closed allotments prior to Law 13.465/17 and whose owner is not associated

In the judgment of Extraordinary Appeal No. 695,911, published on April 19, the Supreme...
Real estate

Co-owner may not oppose auction of real property due to attachment of debtor party, decides STJ