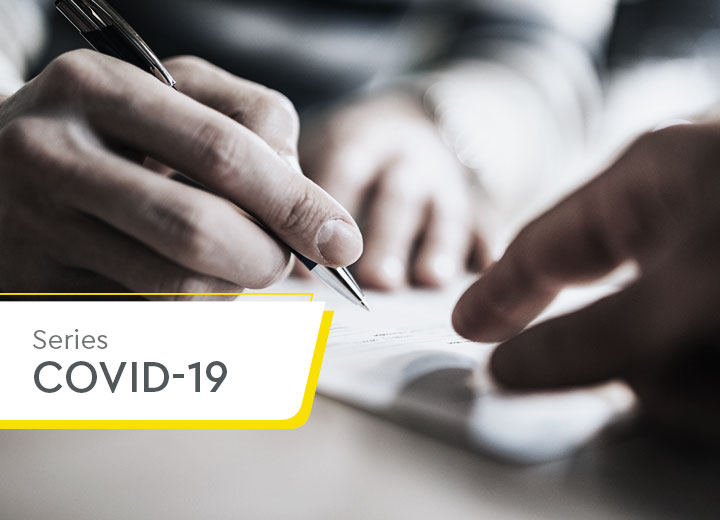 On March 30, the acting presiding officer of the Senate, Antonio Anastasia, proposed Bill No. 1179/20, which creates the Emergency and Transitional Legal Framework for Private Law Relations (RJET) for the period of the covid-19 pandemic.

The bill includes emergency measures similar to those approved by parliaments in various countries, such as the United States, England, and Germany. It is also inspired by the Faillot Act of January 21, 1918, which created exceptional rules for the application of the theory of unpredictability in France.

In Brazil, the bill is limited to private law and does not deal with bankruptcy and reorganization matters, as explained in its principles.

On April 3, the bill was passed in the Federal Senate, in the form of its replacement, partially accepting some amendments presented.

In this article, we will focus our analysis on the provisions of the RJET relevant to commercial contracts.

In its justification, it is stated that the RJET has four principles:

Although it does not expressly deal with the issues below as principles, the RJET recognizes that:

Structure of the RJET and general provisions

The RJET deals broadly with the most varied of legal relationships in private law in 13 chapters and in a section of final provisions, structured as follows:

In the general provisions, the sole paragraph of article 1 defines the initial term of the events derived from the covid-19 pandemic: March 20, 2020, date of publication of Legislative Decree No. 6.

Article 2 states that suspension of the application of standards referred to in the RJET does not mean their repeal or amendment.

The RJET addresses the consequences of the covid-19 pandemic for commercial contracts in its articles 6 and 7.

Article 6 states that the consequences of the pandemic on the performance of contracts, including those arising from unforeseeable circumstances and force majeure, shall not have retroactive legal effects.

Article 7 provides, in its head paragraph, that, for the purposes of applying the theory of unpredictability and excessive burdensomeness of the Civil Code (contained in its articles 317, 478, 479, and 480), increase in inflation, foreign exchange rate variation, devaluation or substitution of the monetary standard are not considered unpredictable facts.

It adds, in its paragraphs 1 and 2, that the rules on contractual revision of the Consumer Protection Code (also called the theory of the objective basis of the deal) and the Urban Real Estate Lease Law are not subject to the provisions of the head paragraph. It also establishes that consumer protection rules do not apply to contractual relations subject to the Civil Code, including those entered into exclusively between companies or businessmen.

Even if it is not in the articles of the RJET, there is in its justification a provision that the effects of the pandemic are equivalent to those of unforeseeable circumstances or force majeure, but that they do not take apply to obligations due before the recognition of the pandemic.

In relation to commercial contracts, the RJET did not bring in innovations, but rather a legal consolidation of doctrinal and jurisprudential majority positions on the institutes dealing with supervening change of contractual circumstances.

Article 6 makes explicit the non-retroactivity of the effects of the pandemic, including those arising from unforeseeable circumstances and force majeure, which is also reinforced in the justification of the RJET, where it is stated that these effects do not apply to obligations that fell due before the recognition of the pandemic. This is already the standard of Brazilian civil law.

It is settled case law that situations resulting from macroeconomic crises in Brazil, such as increased inflation, foreign exchange rate variation, devaluation, or replacement of the monetary standard, are not considered unpredictable for contractual relations under the Civil Code. The head paragraph of article 7 consolidated this case law. It seems to us that the list of events contained in this provision is merely illustrative, thus not excluding others that may be considered predictable.

In turn, paragraphs 1 and 2 of article 7 consolidate jurisprudential and doctrinal positions to the effect that: (i) the contractual revision of the Civil Code is different from the contractual revision of the Consumer Protection Code and the Urban Real Estate Lease Law; and (ii) the rules of the Consumer Protection Code are special, and do not apply to legal relationships that are exclusively subordinate to the Civil Code.

Considering the principles mentioned above, especially that of maintaining the separation between parity and asymmetrical relations, the RJET is aimed at avoiding interference in parity relations and favoring the mechanisms of risk allocation in commercial contracts arising from this type of relationship.

Even the rapporteur in the Senate, Simone Tebet, indicated during the deliberations that she considers one of the most relevant points of the RJET to be the distinction between parity and asymmetrical relations, especially for the purposes of applying the rules of contractual revision.

In view of this, the text aims to bring about greater legal security by providing general and binding effects for the Brazilian population, since this did not derive from the existence of the jurisprudential and doctrinal positions mentioned above.

In relation to commercial contracts, the guidance is reinforced that the problem of the effects of the pandemic always require a circumstantial analysis, considering the characteristics and provisions of each contract.

This problem is highlighted in the justification of the RJET, where it is peremptorily stated that the effects of the pandemic are equivalent to those of unforeseeable circumstances and force majeure. If this were not enough, on April 2, Senator Marcos Rogério presented Amendment No. 11, in which he proposed adding another paragraph to article 1 to expressly state that "for the purposes of this Law, the impacts caused by the pandemic are considered cases of unforeseeable circumstances or force majeure. Fortunately, after the deliberation on April 3, this amendment was rejected.

Thus, although the pandemic is an unpredictable event and beyond the control of the parties (and there is no doubt about this), it is the consolidated understanding in Brazilian legal scholarship and case law that a finding of the occurrence of unforeseeable circumstances or force majeure requires an analysis of the specific case. The inclusion of legal provisions that could eliminate or limit this analysis is very harmful, not least because it could lead to disregard for the conduct of the parties in taking measures to mitigate the effects of the pandemic and potential harm to the other party.

Finally, it is also important to note that the justification of the RJET states that some of the rules contained therein will be presented by the Chief Justice of the Supreme Court (STF) to the National Council of Justice (CNJ), in the form of a recommendation to Brazilian magistrates.

We are monitoring the proceedings and, after the vote, if there are any relevant changes in relation to commercial contracts, we will conduct further analysis.